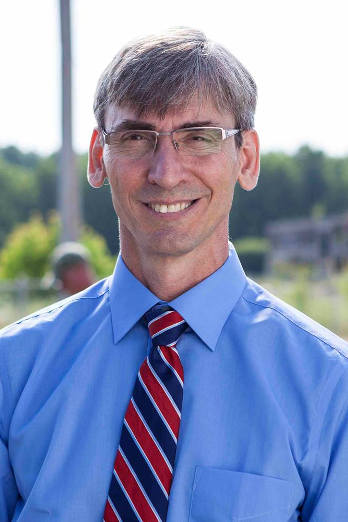 Paul has been a Professor of Political Science at Western Michigan University since 1996, teaching about national economic and social development strategies, program planning, and program evaluation.

Paul received his bachelor’s degree in social science from Harvard and his masters and doctorate in public policy from Princeton. He taught mathematics while serving as a Peace Corps Volunteer in the Gambia. He has worked on evaluation systems with the U.S. government and with the United Nations, and he has consulted on evaluation in Washington DC, Peru, Brazil, Ghana, Uganda, Rwanda, Tanzania, Bangladesh and the Philippines.

Paul was born in Dallas, Texas, in 1961. He lived for most of his childhood in Hong Kong and India where his father worked as a social worker with the Methodist church. Paul’s wife is a librarian and they have two daughters.

Support our fight for Paul

Paul Clements is running to represent Michigan’s 6th Congressional District, which is currently represented by incumbent Fred Upton, one of the worst of the worst when it comes to political corruption.

Why We Chose Paul Clements

Paul Clements supports the boldest reform in Congress, the Government By The People Act, which would match small-dollar donations and decrease the influence of big-money donors.Fred Upton, on the other hand has taken in $10 million in PAC money and voted to protect special interests - and his own interests - over the interests of his district.

President Obama won Michigan’s Sixth District 53% to 45% in 2008 and narrowly lost 49% to 50% two years ago. In 2012, Upton won reelection by the ​smallest margin of his career and Paul Clements ​is running the most competitive campaign against ​the entrenched incumbent in over a decade.

Fred Upton has failed to hold oil companies like BP and Enbridge accountable when they spilled massive amounts of oil in the Gulf and in the Kalamazoo River, instead leaving taxpayers to pay for the clean up. At the same time, Upton owns as much as 250 thousand dollars in BP and Exxon stock and he’s taken over one-point-six million dollars in campaign money from big polluters like oil and gas companies.

Upton voted to give tax breaks to companies that ship American jobs overseas to countries like China and India. He also supports unfair trade laws like NAFTA that have sent thousands of Michigan jobs overseas.

Upton puts himself and his wealthy donors ahead of regular folks in southwest Michigan. Upton voted to protect perks for himself like taxpayer-funded health care for life, first class airfare, and he voted to give himself and the rest of Congress pay raises even though Congress isn’t getting the job done. He even voted to exempt Congressional insiders from insider trading laws, so his political friends can get rich quick from their work in Congress.